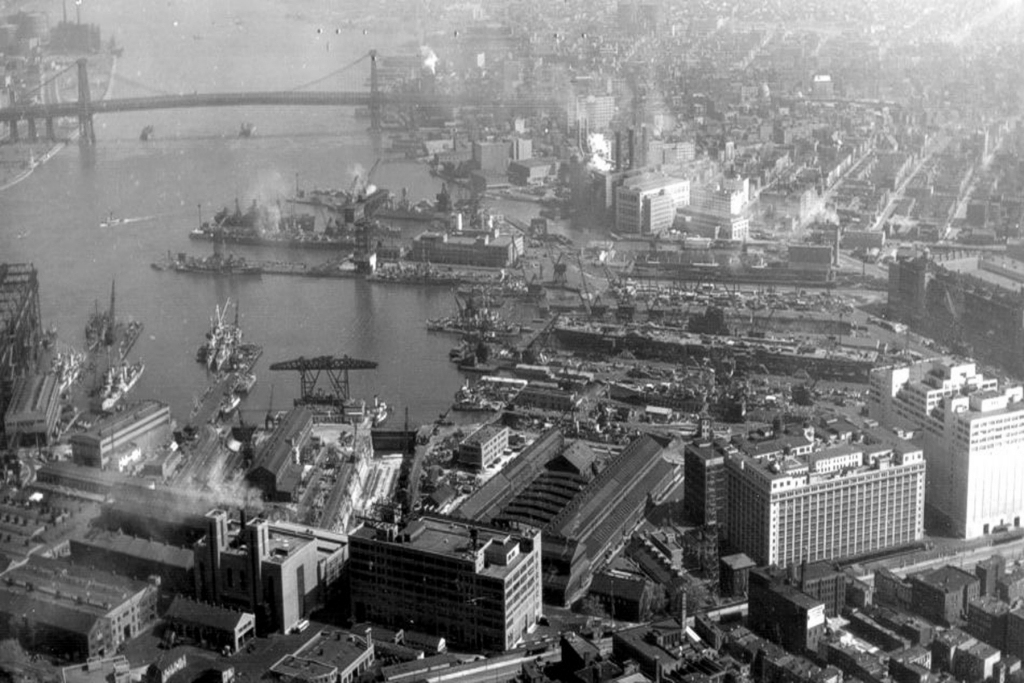 Today, the Brooklyn Navy Yard offers tours which allow visitors to learn more about the 300-acre space. The intriguing architecture includes a drying dock that has been in use since the Civil War as well as a 24-acre former hospital which is now one of the nation’s first multi-story LEED Gold-certified industrial buildings.

The history of the Brooklyn Navy Yard stems back to 1801 when it was first established as America’s main shipbuilding facility and the home the nation’s strongest warships.  Commissioned by President John Adams, The yard included a major medical complex called The Brooklyn Naval Hospital, several officers residences called Admiral’s Row and a commandant residence which is also now deemed a National Landmark.  For the next 165 years, Brooklyn’s waterfront would belong to the naval base until the federal government deactivated the military use of the yard in 1966.

Initial Sale and Commercial Rebirth of the yard

After 1966, the federal government moved forward with plans to sell the yard.  After many delays and negotiations based on the price the yard would sell for, it was eventually sold to the city for 22.5 million. Within a few years, the commerce Labor Industry Corporation of Kinds proposed a plan to create numerous jobs and had to the growing economy of America.  The Brooklyn Navy Yard transformed from one of America’s naval docks to a cultural epicenter of industrial development, manufacturing, and distribution.

Planning on heading down to the yard with some friends for a history lesson?  Make sure you bring a map because geographically, the Navy Yard is “off the grid”.   63 Flushing Avenue is the physical address but the trek itself is a journey.

By the mid-2000s, The Brooklyn Navy Yard launched several technology programs.  In 2004 Mayor Bloomberg announced that New York would develop the western side of the Brooklyn Navy Yard specifically for manufacturing, retail and industrial uses.  Funds would be used to expand and upgrade the space.  State officials worked to develop the land for modern use while preserving the history of long-established landmarks like Admiral’s Row to remind visitors of the Yards humble beginnings.

As of 2019, growth at the yard has not slowed down.  It is the quintessential transformative urban environment and its’ development reflects the state of New York’s cultural and social needs.  As of 2019, the Brooklyn Navy Yard is currently undergoing its largest expansion since World War II.  The area has numerous buildings and spaces dedicated to job growth, retail, creative and technological developments.

The largest development in the Yard’s history, this million-square-foot former storage building has been transformed into state-of-the-art manufacturing, tech, and design hub that will be home to over a diverse set of businesses including Lafayette 148, Catbird Jewelry, Armada NYC, Russ & Daughters, and Lights Up.  Building 77’s 60,000-square-foot ground floor Food Manufacturing Hub is the new public gateway to the Yard and features over ten local businesses manufacturing and selling food and beverages from a rich diversity of cultures that represent Brooklyn.

Today, visitors have the opportunity to enjoy tours around the Navy Yard, indulge in community events and participate in activities within the yard’s many buildings.  The Brooklyn Navy Yard is one of New York’s most progressive historic spaces with a rich past and an even more expansive future.