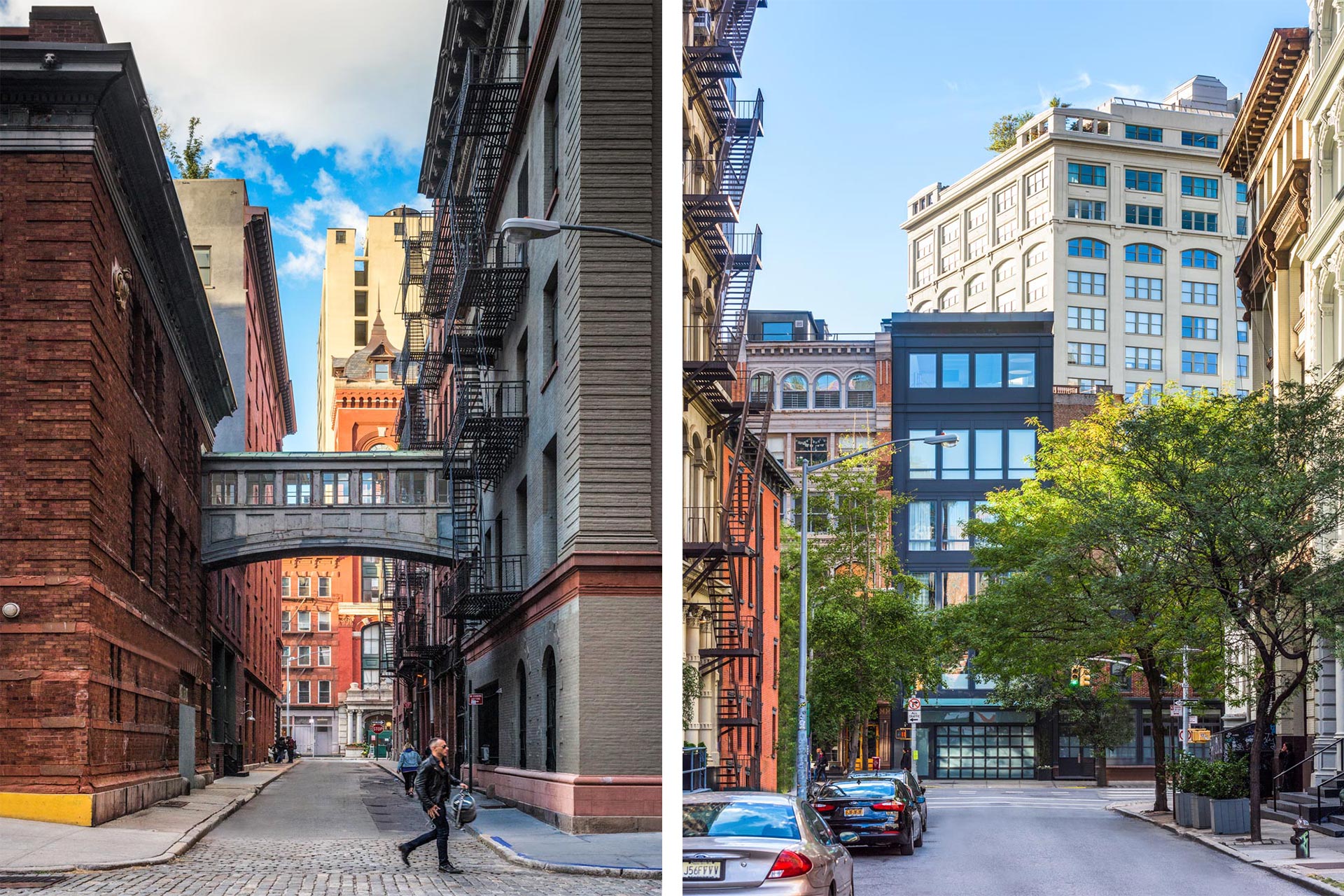 The Triangle Below Canal Street

Before there were penthouses inhabited by the celebrity elite, art galleries and fancy restaurants, Tribeca was a quaint little neighborhood in lower Manhattan.  Today, it is home to some of Manhattan’s newest and tallest structures but at some point in history, Tribeca was the place many wholesalers, product vendors, and artists called home.

The History of Washington Market

Developed in 1812, this “open-air marvel fed New York for 150 years!” (Source: The Bowery Boys). Tribeca was originally developed by Dutch settlers.  As New York City became more industrialized and shipping increased within the New York Harbor, this encouraged the expansion of Washington Market.  Originally opening as Bear Market, it was the place to buy and sell dry goods, textiles, radios, sporting goods, produce and more.  The food hub was a raucous and loud space, filled each weekend with vendors, delivery trucks, food suppliers and customers.  “By the 1880s, there were more than 500 vendor stands and over 4,000 farmers’ wagons driving into the city daily to sell.  With the growing complexity of its operations and evolution into a regional food distribution hub, New York City’s Office of Public Markets stepped in to regulate the competitive relations between farmers, wholesalers, and consumers.  The office took responsibility for such things as public health and safety, traffic regulations, and weights and measurement standards. Although this specialized city bureau no longer exists, it underlines the vital role markets played in civic life.” (Source: https://www.pps.org/article/how-markets-grow-learning-from-manhattans-lost-food-hub_)

The demolition and relocation of Washington Market to the Bronx in the 1960s was socially devastating but also an important turning point in the history of Tribeca and the importance of farmers’ markets in urban dwellings.  Today Washington Market Park exists as homage to NYC’s most important wholesale market.

An Area of Transformation and Elite Real Estate

Tribeca boasts high-end new developments for the last several years and it is poised for even more expansion.  Tribeca is a landmark destination according to the NYC”s Landmarks Preservation Commission: Tribeca West, East, North, and South were officially marked as historic districts in 1992.

Before Tribeca was littered with skyscrapers and artist lofts were redesigned into fancy high-brow condominiums, pre-Civil War architecture buildings all but encompassed these landmarked districts.  Bruce Ehrmann, co-chair of the Landmarks and Preservation Committee, claimed the goal should be to actively integrate innovation while maintaining the personality of historic neighborhoods.

“I would argue that the notion of a historic neighborhood, of a land-marked neighborhood, that never can be modified in any way with an infusion of new architecture and new ideas is a false notion of preservation… there has to be room within the boundaries of context for fresh ideas.”

“Yea, yea I’m out that Brooklyn, now I’m down in Tribeca

Right next to DeNiro, but I’ll be hood forever.”

Rap Mogul and Brooklyn-born Billionaire, Jay-Z references his luxury New York City abode with pride every chance he gets. Tribeca is an iconic indicator of modern luxury.  Within the confines of the 9.2 million square foot neighborhood is the who’s who of the famous elite.  Taylor Swift, Robert De Niro, Justin Timberlake, and Meg Ryan are just a few celebrities who chose Tribeca as the place to rest their heads.

Besides being filled with notable celebrities, Tribeca is the epicenter of culture.  Specialty bakeries, five-star restaurants, luxury hotels, beautiful museums, and nightlife make it one of NYC’s most noteworthy neighborhoods.  If you ever need something to do while in town check out this list of the 10 things do while here!

10 Things to Do and See in NYC’s Tribeca